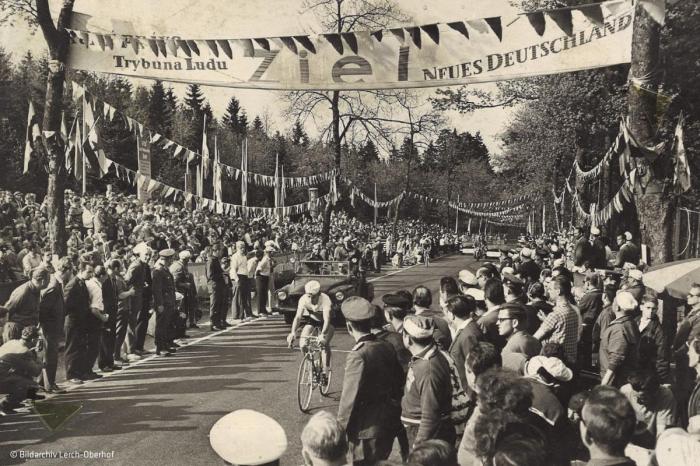 Peace Tour and the Great Love

Gustav-Adolf Schur, better known by his nickname "Täve" Schur, has a special relationship with Oberhof. Probably the most popular GDR cyclist, he was the first German to win the World Amateur Championship and the International Peace Tour.

During the turn of the year 1958/1959, he met his wife Renate on New Year's Eve at the Berghotel Oberhof, which was still a Konsumheim at the time. The newly decorated young activist and the newly crowned World Champion fell in love and married in 1962.

2 years later, Täve Schur experienced the Rennsteig town a little more unpleasantly. In 1964, Oberhof was the first and last stage venue of the International Peace Tour. In an interview with the local newspaper Freies Wort in 2006, he recounts: "When I reached the top, I was dead as a doornail".

The 17th International Peace Tour took place from 9 to 24 May 1964. 14 individual stages with a total length of 2246 km led from Warsaw via East Berlin to Prague. Jan Smolik from the Czech Republic won the cycling race, the team winner was the GDR (with Täve Schur, of course).

Oberhof was part of the 8th stage from Erfurt to Oberhof. Thousands of onlookers lined the finish line that day and celebrated the cyclists.